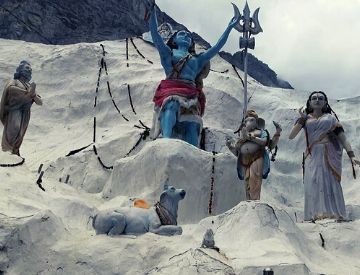 Gangotri is a small town with grand religious importance. It is located in the Uttarkashi district around 105 kms from the main Uttarkashi Town. The town is associated with river The Ganga and holds a great religious significance in the heart of the Nation.  For Indians Ganga is not just a river but is worship, celebration and gateway to Vaikunth. It is believed that being pleased with the deep and hard meditation of king Bhagirath Ma Ganga first descended inform of a river in Gangotri. Since then this place is the center of immense devotion among the pilgrims.

Meaning: River Ganga is considered and revered as Mother in India. Its stream is so pure pious and makes the fertile land of North India, hence its water is considered as nectar. It washed away the sins of king Sagar’s 60000 sons. It was great King Bhagirath who meditated hard for centuries to bring down Ganga in form of the river on earth It is said that a person who takes a dip in the holy water of Ganga washes away his sins and got the strength to face the results of their deeds (Karmfal). We bow down our heads and a heart filled with gratitude and devotion to your sanctimonious river Ma Ganga.

There is a detailed story behind how Ma Ganga came on earth as a river and how the patience and hard penance of King Bhagirath to provide Salvation to his 60000 ancestors made Ma Ganga to descend on earth.

In Rigveda, only at some places, the description about Ganga is given but in Purans ample light about Ma Ganga is given. It is said that when Lord Shiva sang a song in front of Narda, Brahma & Shri Hari Vishnu then due to the impact of music Lord Brahma started to sweat and got collected in Brahma’s Kamandal. From that seat, Ganga came into existence and started to live in Brahmlok.

According to Skand Puraan on the auspicious day of Jyestha Maas Shukla Paksha’s Dashmi Ganga has emerged on earth. This day is celebrated as,” Ganga Dussehra. ”Famous Legend says that Raja Bhagirathi has always been thinking of the Moksha of his ancestors and credited the emergence of river Ganga on earth. The story says Ishvaku clans king Sagar had conducted a huge and Grand Ashvamedha Yaga in his Kingdom. After completing 99 Yaghyas he was conducting his 100th Yagya and released the horse to complete it. In fear of kingdom being snatched Lord Indra took the horse, left him in Ashram of Kapil Muni and went back to Indralok.

When 60K son of King Sagar saw the horse in Kapil Muni’s ashram they got angry and started to say false words to the Muni. Being falsely accused and anger with his yogic powers Kapil Muni turned all the 60K sons of King saga into ashes. Due to delay King Sagar got worried and sent Anshuman his grandson to see them, on reaching Kapil Muni’s ashram he got to know the whole incident. Anshuman then pacified the Muni and asked him to take the horse back so that the Yagya could be completed. In this way, king Sagar completed the 100th Yagya.  On asking the way of Moksha to the soul of 60k sons of Sagar by Anshuman Kapil Muni says:- Only Goddess Ganga through its water can cleanse the ashes and provide them moksha. Later Anshuman performed hard Tapa and after him, his son Dilip continued to perform the Tapa but could not bring Goddess Ganga to earth.

It was then King Bhagiratha who meditated hard for around 5500 years as a result Goddess Ganga pleased and agreed to come on earth. Being emerged from Feet of Lord Vishnu, Goddess Ganga took space in Lord Brahmas Kamandal (Stoup). When Lord Brahma poured it then it falls on the head of Lord Shiva. To save the earth from destruction from the intense speed of river Ganga Lord Shiva tied her in his headlock. Releasing from Lord Shiva’s lock the stream of river Ganga came to Shrimukh mountain and further divided into three streams. The stream which comes with Bhagirath emerged from the north end of shrimukh mountain, second went to Alka and third Kuruvarsh.

Then Bhagirath guided Ganga to move towards the place where the ashes of his ancestors were laid and in this way they got salvations. But all this not happens so easily after the Ganga emerges it drowned the Ashram of Jahnu Muni and in anger, he drunk the whole river. But after the request and prayer of Bhagirath, he released the Ganga river from his ear that’s why Ganga is also called as Jahnvi.

River Ganga emerges from Gaumukh Glacier, on the base of Shivlinga Mountain. From here it covers a distance of 2480 kms to the Bay of Bengal. The river is called Bhagirathi at origin and meeting with the Alakhnanda river at Devprayag it is called Ganga.

It is said that after the epic Mahabharat War Pandavas performed Dev Yagya in Gangotri as Prayshit.

According to Adi Parva of Mahabharat, there is one another story about Ganga’s birth as a Human on earth.

The spiritual form of Ganga is like Devangana, she was present in the meeting of Brahma one day. At that time, due to the winds of air, her body suddenly rose like a moonlight. In that state, because of seeing her from the point of view of the body lord Brahma cursed Ikshvaku Vanshi, the great virtuous and mighty king, ‘Mahabhisha’, who got heaven after satisfying Indra through hundred Rajasuya Yajnas, to be born in mortal. At the same time, Ganga was also indicated to go with him for his conduct.

Due to the curse of Brahma Mahabisha took birth as Shantanu son of King Pratip. The  Ganga too took birth on earth and married to Pandavas ancestor King Shantanu. She gave birth to 7 children and flowed away from them in her stream. Then after Shantanu’s request, she left the eighth child Bhishm and On getting the act done against her wish, as per the prerequisite, Ganga left Shantanu and went to heaven.

The Ganges is the intact core of ‘Sanatan Dharm’, the soul of Indian culture and the mother power of the people. The water of the Ganges not only reduces the instability of the mind, but also the diseases of the body to disappear. Ganga Mata relieves all the sufferings of the individual. Being emerged from Himalaya she can be called the daughter of Himalaya. She has saved millions of people on this earth. ‘Gangotri’ is the ultimate pilgrimage among pilgrimages, the best river in rivers and the salvation of all beings.  She has connected every corner of India and citizens of the nation in one thread. In the Skanda Purana, specific virtues of Ganga bath are described as follows – Taking a bath on Amavasya is a hundred times more beneficial as compared to the normal days. Taking a bath on the eighth day is a hundred million times, a bath on Monday of Lunar eclipse and on Sunday during solar eclipse gives innumerable Virtues results. The Ganges has no limits and cannot be. Just as there is no limit to sin and virtue, similarly the waters of the Ganges cannot have any limit. The music of life can be tied into words but not the waves of the Ganges.

Means from “of all the pilgrimages on this earth, Ganga is the best, no other pilgrimage like this on this planet is there to destroy sins.”

Best 7 Places To Visit Around Gangotri

Mr. Vikas Sharma holds (Masters in Tourism Management from BHU, Diploma International Tourism from KUK & Yogacharya from Uttarakhand ). He has more than a decade of work and writing experience in the field of Travel & Tourism in Top shot company of India. He developed his hobby of writing and is been engaged in writing fruitful content on travel, education, spirituality and yoga.

Chardham Yatra Opening & Closing Dates 2021 Greatest among all the Pilgrimages, way to Vaikunth is –The Char Dham Yatra.Char Dham situated on the divine lap of Himalaya surrounded by high peaks and forests on the Read more…

TEHRI LAKE FESTIVAL 2020 Note – We regret to inform you that due to the increase risk of Corona Virus across the world, The Teri Lake Festival, 2020 has been cancelled by the Organisers. Image Read more…

This site uses cookies to enhance your browsing experience Find out more.